FRANCE – PRESIDENTIAL ELECTION: Yes!!! CRAZY is going on EVERYWHERE. So… Pay Attention People!!! Watch What Happens In These Elections…World Wide. It Will Tell You Who Is For God…& Who Is Against Him??? 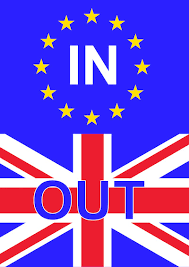 STRAIGHT UP!!!   I have noticed in no uncertain terms that…people are worried as hell.   People are depressed…   People are afraid…  People are anxious…  People are going in circles…  People are on edge…  People just seem dazed…  EVERYWHERE!  Oh My Dear People… WHY?  WHY…are you so NOT yourself?   Yes.   You know & I know… Donald Trump is breaking-up families by tossing even… “dreamers” out of this country.    Yes.   We know about Brexit (United Kingdom’s exit from the European Union).   Yes.  We know that the Syrian government has killed more of its own citizens by chemical attacks.  Yes.   We know that North Korea is test firing missiles.   And…  Yes.  We know that Mexico is still saying “we are not paying for any damn wall.”  (YOU GO MEXICO!!!) And… 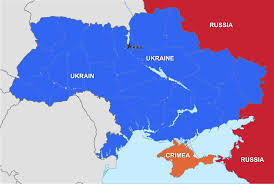 Literally…as I am writing this post France is voting for a new President (Round 1).    And, this shit is significant.  VERY SIGNIFICANT!  Why??? Because, there are some candidates in the running who are staunch, pro-Putin people.  These candidates, like Putin, want to destroy NATO, the European Union & allow Putin to do whatever the hell he wants in running over smaller countries.  YES!!!  These pro-Putin candidates would go right along with dear Vladimir doing the same shit that he did in Ukraine…elsewhere.   Remember, he cut out of a piece of that independent country, Crimea, for himself.   That’s right.  In early 2014 Putin annexed a neighboring country’s territory by force.  Who the hell does this, but, an evil ass dictator…who wants to dominate the world??? Think about it…  It’s like him coming to the United States (another independent country) & literally grabbing New York City for Russia.  While the rest of the country would still be the United States, for all practical purposes, New York City would belong to Russia.  Do you see what I mean???  He did that shit in the Ukraine, by taking Crimea.   O.k… 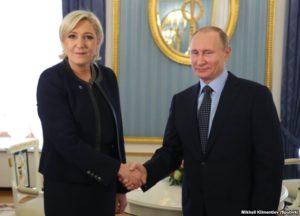 One of these staunch… pro-Putin candidates is Marine Le Pen.   The far-right candidate, Marine Le Pen, is the daughter of National Front founder Jean-Marie Le Pen.  Many are saying that Le Pen is the Kremlin’s first choice in the race.  Why???    Le Pen’s campaign platform is an anti-immigration, pro-nationalism (code for racist), anti-globalization platform.    You know this shit is right up Putin’s alley since he is trying like hell to weaken the European Union (EU) and NATO.    In March 2017, Le Pen went to Moscow to visit with Vladimir Putin.   It is also being widely reported that Russian sources is banking Le Pen’s candidacy.   O.k… 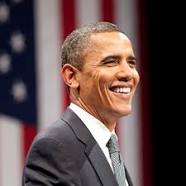 is reporting that at about (5pm BST), roughly 37 million people will have turned out to vote.   On April 20, 2017, CNN reported that President Barack Obama privately telephoned French presidential candidate Emmanuel Macron — “a conversation that Macron promptly made public by uploading the call, on speakerphone, to Twitter.”  Below is a transcript of the telephone call…courtesy of Vox.

MACRON: [cheerfully]: “Hello, Mr. President, how are you?”

OBAMA: Is this Emmanuel?

OBAMA: Well, I’m doing very well! How are you? Can you hear me?

OBAMA: The main message I have is to wish you all the best in the coming days. And make sure, as you said, that you work very hard all the way through because you never know — it might be that last day of campaigning—

MACRON: I do agree—

OBAMA: —that makes all the difference.

MACRON: I will do my best, believe me. And … so I will fight to the last minute, and we will keep in touch, and our teams will organize a new contact to see how to work together if I’m going to the runoff. Thank you very much. I do appreciate that you took the time. 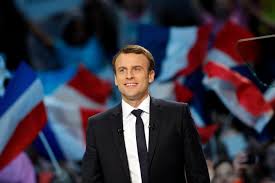 So…   Who is this Emmanuel Macron???    Macron is being called the “centrist” candidate.   The Telegraph is telling us that 39 year old  Emmanuel Macron  is a “clean-cut, pro-business, former minister who heads independent political movement “En Marche” (“On the Move“).  The son of two doctors, he was raised in the Picardy town of Amiens and attended the La Providence Jesuit school in his home town before moving to Paris to pass his baccalaureate at the renowned Lycée Henri-IV, followed by Science Po, the political sciences school.”   And, guess what else??? 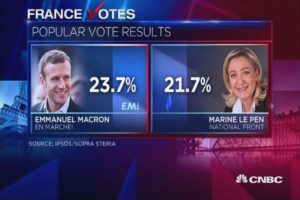 Right now… at 2:43 p.m. (EST)…they are reporting that the election projections are that Emmanuel Macron & Marine Le Pen will meet each other for the final round of voting on May 7th.  Yes… Let us…THANK GOD!!!   The seemingly more reasonable &  potentially helpful candidate to any godly cause, Emmanuel Macron, is still in the running.   BUT…   Remember, so is Le Pen.    That pal of Vladimir Putin is on the side of the devil.    I’m telling you the truth.    It is time for the French people, who believe in God, to become pro–Emmanuel Macron.   It is time for the rest of us, who believe in God, to put in our 2 cents into the pot.   Yes…  Even 2 little cents can make a hell of a difference in these matters.   You see…  God honors our heart motives &… even our tries when it comes to his purposes.    He tells us…  Do what you can and I’ll take care of the rest.   So… 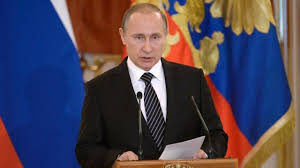 People…  These elections happening all over the world…WILL…have direct impacts on all of us.   We are a global world.   When one country sneezes…the rest of us will catch that cold.   So… It is very important that we pay attention to what’s going on.   It is very important that we put in our prayers…& energy into stopping these “devilish” asses from destroying all that is good & godly in this world.   We do not have time to be skipping around the mulberry bush anymore.  It’s time to… WAKE UP & GET INVOLVED.   I’m telling you…  The devil & his human minions could give less than a damn about the men, women & children that were poisoned by that no good ass Bashar al-Assad, in Syria.   Vladimir Putin was Bashar’s partner in crime… in this shit.    And…  If you think that Vladimir Putin lost one moment of sleep…over the murder of Syrian children & babies…then, you don’t know jack about the devil.  That bastard…Vladimir…probably smirked & smiled.   You see…  The devil & his human minions take great pleasure in destroying God’s children.   So, we must fight…pray…& fight some more.   We must work our asses off to stop people like Marine Le Pen from reaching the highest elected office in France.    And…

If the truth be told…   I do like the fact that Emmanuel Macron’s first name “Emmanuel” means… “God is with us.”     You see…   Even the smallest of  things can keep God’s light of hope…lit within a human heart.

545 Responses to FRANCE – PRESIDENTIAL ELECTION: Yes!!! CRAZY is going on EVERYWHERE. So… Pay Attention People!!! Watch What Happens In These Elections…World Wide. It Will Tell You Who Is For God…& Who Is Against Him???