IOWA CAUCUS: The Iowa Votes Have Been Counted And Donald Trump Finishes Second!!! Donald Trump So Graciously says: “I’M HONORED TO FINISH SECOND.” & I Say “YOU ARE A DAMN LIAR!”

Posted on February 3, 2016 by iriswhiting

On Monday Night, the Iowa Caucus goers voted & Ted Cruz  is the winner of the Iowa Caucus for the Republican Presidential Nomination.   Yes…I said “Ted Cruz,” not…Donald Trump.   While Trump was projected to win the Iowa Caucus, according to the polls, he did not.   With about 99% of the GOP vote in, Ted Cruz is ahead of Trump 28% to 24%.  Marco Rubio is at 23%.  After the news commentators announced Ted Cruz as the projected winner, Trump made a speech to his group of supporters.

CNN reports that hours after predicting a “tremendous” victory, “Donald Trump delivered a short but gracious speech that lacked his normal bombast, 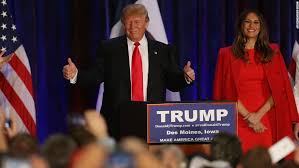 saying he loved Iowa and vowed to bounce back next week in New Hampshire.”  Trump said, “We will go on to get the Republican nomination and we will go on to easily beat Hillary or Bernie. We finished second, and I have to say I am just honored.”

O.k….for the sake of clarity… let’s take a look down memory lane.  Let’s look to see what Donald Trump has said to us in the past about “winning” & about 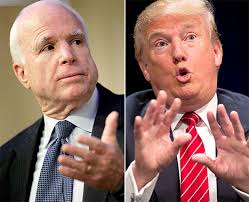 “losing.”  O.k.  During the Vietnam War, Senator John McCain was shot down over Vietnam while flying his 23rd mission.   For more than 5 years,  he was a prisoner of war at the infamous “Hanoi Hilton.”  His North Vietnamese captors starved and tortured him.   Back in July 2015 while campaigning, Donald Trump said “I like people that weren’t captured.”   Trump, who claims that he raised money for McCain’s campaign in 2008, also said that he doesn’t like McCain as much now as he did then, because McCain lost. “I don’t like losers,” Trump said.

The operative term here is “loser.”   Trump has said the statement “I don’t like losers” over…& over…& over again.   I mean…he has said it so damn much

that it has been sickening.  What does this tell us?  It tells us that Trump hates losers… & Trump hates losing.   I tell you what…I would hate being in his household right now.   I know he is fit to be tied.  Why?  Because Trump has built this whole facade about being a “winner” & not being a “loser.”     He has built his whole platform around “winning” and being “great.”

Now…Make no mistake about it.    Donald Trump hates the fact that he came in second during the Iowa Caucuses.   And…since second is “not” first…then, Donald Trump lost… even in his own mind.    The narcissistic side of this man likes people looking up to him as being “great” & as being “number 1.”    He loves being adored by others.    Donald Trump doesn’t think that people who come in “second,” instead of first, stay in the hearts and minds of others. Quoting Walter Hagen, Trump tweeted 2 years ago: “No one remembers who came in second.” – Walter Hagen    30 Dec 2013

So…when Trump says, “We finished second, and I have to say I am just 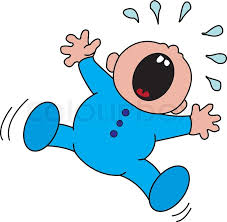 honored,”…  I have to respond to him in this way, “Trump, You know damn well you are not honored about being a ‘loser.’   Who are you trying to fool?   I do have a suggestion that might help you…though. Go…lay down…cry your ass off…take a nap…wake up…cry your ass off again…get up…blow your nose…& move on.”

34 Responses to IOWA CAUCUS: The Iowa Votes Have Been Counted And Donald Trump Finishes Second!!! Donald Trump So Graciously says: “I’M HONORED TO FINISH SECOND.” & I Say “YOU ARE A DAMN LIAR!”