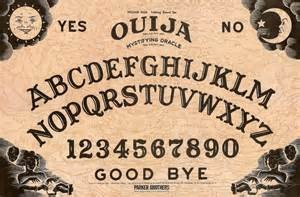 I remember our family getting a Quija Board back in the day.   We were intrigued by this game that was suppose to answer questions by itself.   It first seemed like it would be a lot of fun.   However, it did not stay too long in our household.   While it was the popular game to have at the time, it was as if we knew something was not right about this thing.   We didn’t look at it like a game.  It seemed creepy and it soon found its way into the trash.   Once it was gone, it stayed gone.

Let’s briefly talk about the origin of this board and what it’s suppose to do.  In the late 19th century, advertisements came out touting the Quija Board as being interesting and mysterious.   They said it was good as a mystical oracle and as family entertainment.   It came about because of the American 19th century obsession  with people trying to speak to the dead.   You are to ask the board questions and it provides the answers.    While people are touching the teardrop-shaped device, it basically moves by itself to provide your requested information.   So, it seems that the board was created for Satanic purposes.   God clearly warns us against trying to speak to the dead.  God specifically says, “No one shall be found among you who makes a son or daughter pass through fire,  or who practices divination, or is a soothsayer, or an augur, or a sorcerer, or one who casts spells,or who consults ghosts or spirits, or who seeks oracles from the dead. For whoever does these things is abhorrent to the LORD …” (Deuteronomy 18:10-12)

Believe me, there is nothing harmless or entertaining about this board.   To the contrary, it is a very dangerous thing to have in your house… anywhere.   So, what is the problem with having a Quija Board?  After researching this issue, the Quija Board appears to do what they say it does.   It appears to move by itself to answer questions presented to it.   You know and I know that an inanimate object has no business moving by itself without some kind of mechanics attached that would make it do so.    So, what is going on here? Pay close attention & let me tell you.  The device is actually being moved by demonic spirits that you cannot see.   The Demons use this Quija Board as a way to communicate with you.  Only God knows what lies they are telling to people through the board.   As stated above, God says that you are not suppose to consult these demonic spirits for answers about anything.  Why??? Because they are not Him. They are not God.   When you seek advice from demonic spirits you are putting them in the place of our Heavenly Father.   You are in essence committing idolatry.  What does He say about idolatry??? That’s an easy one.  He says in one of His ten commandments, (the 1st one as a matter of fact), that “…you shall have no other gods before me.” (Exodus 20:3)

So, stop looking for advice in all the wrong places.   I know… I know…  I know…   We live in such a fast pace kind of society that everybody is looking for fast this and fast that. I have been there & done that too, with that “want it fast & quick” kind of shit.  All it does is lead you to a fast track…straight to hell.  Instead of trying to get quick answers to the questions of life, you need to slow it down… and form a relationship with God.  Then, he’ll tell you everything you need to know.

You may respond, “Don’t tell me what to do, I’ll play with it if I want to, I’ll play with it if I want to…”  Go ahead, He gave you free will.  But, I will say this…    You are risking your soul & mind. You are risking going to hell.  My Father is not playing with you people anymore.  He conveyed to me quite clearly that He is tired of being blatantly disobeyed.   Second, while you may be waiting to go to Hell (of course not voluntarily), you may become possessed by the Demons you have called up through the Quija board.   Demonic possession is a living hell in & of itself.   People who are possessed become very different (and not in a good way) from the way they were before “a possession.”   A lot of possessed people hurt themselves and their loved ones.   Demonic possession can literally kill you.  The Demons control your body and it’s like your just going along for the ride.   It wreaks havoc on a physical body and this is exactly what the devil wants.   He wants to wear you down until you are dead.  Once dead…he wants you to join him in hell.

Third, your household could become a playground for demonic spirits.   Some people call this “having a haunted house.”  I wouldn’t state it that way because you are not dealing with dead people.   You are dealing with very alive and kicking demons. You see the devil can’t enter unless you open the gate and let him in.   Ooooohhh, but once you do, you literally will have hell to pay.    There is a very high probability that all kinds of craziness will break out in your home,    With Demons running around, scaring you and your children to death,  you literally might lose your mind.  And, I’m not kidding.  Not at all.   There are many households right in your neighborhood, or down the road a bit, where people are fighting demonic spirits daily.  And, they are absolutely clueless about  how they got there and… how to get rid of them.

You have now been told.   So, you can’t say you were not warned.  However, you have a freewill to do as you choose.  I pray that you use your God sense and get rid of any Quija boards immediately.   Then, ask God to forgive you for sinning against him. Pray that He cleanses your home of any evil entities.
Remember, if you let the devil in, all hell will  (without a doubt) break loose.

1,515 Responses to QUIJA BOARDS: DON’T OPEN A GATEWAY TO HELL