“SAVED…BUT, NOT-SAFE“…God Sent Jesus To Save You, But, You Are Still Not Safe From Hell 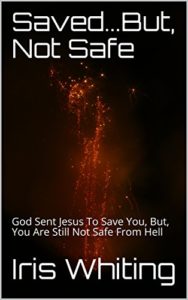 If my recollection serves me correctly, it was in the winter of 2006 when the Heavenly Father pulled me up into Heaven (no joke!!!) and this is what I saw and heard.  Oh yeah…I was wide awake when all of this happened & very alert.   I first thought that I was in a room with the walls, ceiling & floor all painted white.   The white was the “whitest” white that I had ever seen.   I thought, “This white is so bright that it looks like ‘light’.” I don’t know how else to explain it.

The next thing I know is this…a young caucasian male (looked to be around 15 years old) came running towards me.   He had brown, curly hair with a crown shaped olive branch with leaves placed on his head.   The only clothing he had on was a “linen cloth” to cover his private areas.  When he was coming towards me…I thought, “Oh, here comes a runner.”  Yes…I called him a runner. ( I don’t talk like that in the norm.  Usually I would say…”Here comes someone running towards me.”  In all my days before that, I could never remember calling someone a “Runner.”  But, I called him that just as naturally as anything.

“The Runner” stopped in front of me & handed me a stone tablet ( 4″ by 6″ or so).  It was about an inch thick.   It had writing on it that I could not understand.  It looked like some kind of ancient writing.    I looked at it…puzzled.   I thought, ” What is this stone tablet? & What does it say?”   Just as I thought those thoughts… God answered me audibly.  He heard my thoughts & responded to my questions.  And…  These are the words He spoke,  “It is my word…don’t change it.”  If I am lying…I am flying, & right now…& I am standing still.   I am telling you the truth ( I would swear this truth to you, but, God says we should not swear)  But, I pray that God in Heaven reveals to you, right now… as you read this, the truth of all that I am telling you.

Now, once God said those words to me, I came back down to earth & was again…in my house, on the couch.    The Heavenly Father then said, ” Go & get a couple of notebooks. From here on out you will write down everything I tell you to write in those notebooks.” And, that is what I did.   I wrote in the notebooks every time He told me to.   In all honesty, at times, what I was writing didn’t make a lot of sense to me.  Let me try to explain.   O.k., one day He would tell me to write a paragraph or 2…& then, the next day, He might tell me to write on a whole different matter…maybe 2 or 3 pages.   I guess what I’m trying to say is this…   What I was writing didn’t seem to flow together (this…was according to my finite human understanding at the time).   Well…I tell you what…   I continued writing & writing as He instructed.   Two years down the road, the Father had me put in book form, all the writings that He told me to do over that 2 year period.   The result of those writings…culminated into the book called, “Saved – But- Not Safe.” God literally wrote this book through me.  It literally came straight from Heaven!!!  How cool is that?  Now…

Sometimes, it was a very painful experience for me to go through this process of writing this book.  Literally,  the bones in my body would ache like a tooth-ache.  Tears would stream down my face, because of the pain, while I was typing the book.  The supernatural part of this is that I had no physical ailment that could account for the pain. God told me later, after the book was finished, that He allowed all of those times of physical pain…so that when I was writing the book, I was purely concentrating on what He was telling me to do, during the process.  He said this was the way He used to get me out of the process so that none of me…& all of Him…was in the book.  I must tell you the truth & shame the devil.  Many of those pain filled times made me very angry.   My body hurt soooo bad I could barely stand it.  It felt like some 350 lb muscular man kept picking me up and throwing me against the wall.  Picture it.  That was the kind of aching that was going on throughout my whole body.   It was only by the grace & mercy of God that I was able to finish writing the book…despite the physical pain that I was experiencing.    I guess I needed to tell you this part to let you know that when you serve the will of God, there will be many times that He requires you to suffer.  I mean really suffer.   But, let me also tell you this…  If I could bare it…so can you.   Truly, He does not put any more on us then we can bear.  I’m a witness to this truth.   Despite the pain, writing the book was one of the greatest blessings I have ever received from God.   Think about it…   What an honor for Him to trust me with producing this book for Him.     I truly changed as a person because of this task.   The person who came out at the end of the 2 year process…is so extremely different from the one who started it.  Hallelujah. PRAISE GOD!!!  O.k…

The book is a warning that God is sending to all of His children…throughout the world.   He wants us to know that while He sent Jesus to save us…we are still not safe from hell. The beauty of the book is that God tells us how to keep safe from hell & how to get back to Him in Heaven.   How crazy GREAT is that??? He had me write it in a very plain & matter of fact…kind of way.  He wanted to make it as easy as He could for you understand what He was trying to tell you through the book.

The table of contents for the book:

SECTION ONE ‐ “BEING SAVED”

Chapter 1.   What happened? Why do I need to be saved?

Chapter 2.   If Adam & Eve sinned and brought eternal death upon us, what’s left?

Chapter 4.   Why should I care after my physical body dies?

SECTION THREE ‐ “THE WAY TO HEAVEN”

Chapter 11. Take Up Your Cross Daily

SECTION FOUR ‐ “WHY DO WE STRAY FROM THE WAY TO HEAVEN?”

This “Saved…But, Not Safe” e-book is available for purchase at Amazon at: http://www.amazon.com/dp/B0735KWHXT

The purchase of the book will help me maintain this blog…& expand it.

God thanks you for your support &…so do I!!!