Vice President – Joseph Biden for President: Many are Saying, “Run JOE Run!”… Do they also think Hillary Clinton is Crazy?

Posted on September 8, 2015 by iriswhiting 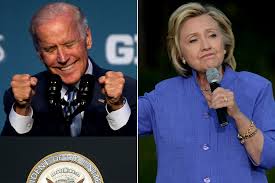 Any way… This is very serious business.   Let me explain.  At the beginning of this year, many people within the Democratic realm, had pretty much anointed Hillary Clinton as the person who was going to get the Democratic Nomination.   She was looked at as a “shoo in” for the nomination.   Truly…this was the predominant stream of thought for most of the Democratic leadership.  Well, then…a few months passed and Hillary started campaigning.  She announced her candidacy (in April 2015)… & everything has rolled down hill for her since.  O.k.   In a brand-new NBC News/Marist poll, for New Hampshire, Bernie Sanders leads Hillary Clinton by 9 points.   In July 2015, Hillary was ahead of Bernie Sanders by 10 points in New Hampshire.   The same poll shows, in Iowa, that the 24 point lead that Hillary had over Bernie Sanders in July 2015 has dwindled down to only 11 points.

And…if you are keeping track of the “shoos,” it is appearing more & more…everyday, that Hillary Clinton has become more of a “shoo out” than a “shoo in.”  I’m very serious about this.    She doesn’t even like to talk about where she stands in the “polls.” When an interviewer brings up “polling results” in the interview, you see how concerned she is.   And…she needs to be concerned.   There is an echo in the air that takes you back to 2008.   It lures you back to the Clinton v. Obama results.  And…you know how that turned out.

Well, yesterday…the New York Times reported that Hillary’s campaign said she is starting anew.  Yes, Hillary is restarting her campaign.  Meaning what?   Meaning…that Hillary is going to show us “her humor” & “her heart.”   My first thoughts were, “Well, who in the hell have I been seeing?  Oh…was that cold, aloof person that I thought was Hillary Clinton really an alter evil personality  (you know…like Sybil) and now we get to see the real Hillary?”  Oooh goody.  O.k.  This “begin again Hillary”  type of talk is actually scarier than the cold, distant & out of touch Hillary that I have come to love.     I mean really people…is she crazy?  It’s like they think the public is sooooo stupid.   O.k…so what’s the deal… & how is this suppose to work?  Do they expect us to pretend that we haven’t heard from her or seen her since April 2015…even though she has been flooding the airwaves?  Am I suppose to erase my dvr news events that talk about what Hillary Clinton has been saying and doing over the past five months?

O.k…for the sake of argument…let’s say that we accept Hillary’s “begin again” notion & we pretend that she just announced her candidacy today… will it make a difference???   Will it make a difference to the public if she “begins again” and shows us this humorous & more touchy…feely side?   Will her ratings in the polls improve?   Mmmmhhh…waaaaait…I’m still thinking … Mmmmmhhh… NO!  I don’ think so.   You know there is a saying, “You can take an egg out of a chicken…but, you can’t take a chicken out of an egg.”  (Please tell me you did not believe that…I was kidding.)  O.k…I’m sorry…I digressed.  God told me to behave & move on.  Fine.

Now…there is really a saying which goes something like this, “A leopard can’t change it’s spots.” This applies to Hillary Clinton.   Hillary is aloof and cold when it comes to her dealing with everyday folk.   Her attempt to reinvent herself is not going to work.  Why? Because she can’t change who she is.  She is going to come across as being phony.   People are going to see a cold & aloof person pretending to be humorous & warmer.  This has been her problem all along.   People have complained that she has been scripting herself & her campaign…like she’s on stage or something.  There is really something wrong when a person is trying to program who they are going to be.  When I go out in the world, on any given day, I don’t say to myself, “self…you are going to be humorous & softer today.”   I’m just gonna be who I am at any given time.   Whether that means I am happy, sad, humorous, grouchy…etc…   I don’t have to think about being it,  “I just am.”

So, for you people, who are multiplying in number, & who are saying “Run JOE Run!,” you are on to something.   You see that Hillary is slipping…& sliding away.   Her campaign is in trouble with a capital T.  The saddest part is that…it’s her own doing.  No one makes Hillary do anything that she doesn’t want to do as far as her campaigning goes.     At one point, because she did not want the media to come around her as she was walking down the street (supposedly to interact with the public), she had her campaign team rope off a walking area that the press could not cross.   It was really crazy looking.   I thought, “What are you doing? If you think this is the way to win over people you are wrong.”   For…it wasn’t just the press that were roped off from her…so were the people she was supposedly trying to interact with.  Oops.

2,847 Responses to Vice President – Joseph Biden for President: Many are Saying, “Run JOE Run!”… Do they also think Hillary Clinton is Crazy?