Presidential Candidates – Donald Trump & Hillary Clinton: Pick One??? How about Pick None!!! Because…One is Just As Bad As the Other!!!

Posted on November 8, 2015 by iriswhiting 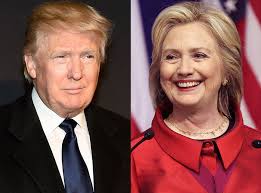 I keep trying to tell myself when I wake-up in the morning… “GIRL…IT’S JUST A BAD DREAM.   DONALD TRUMP & HILLARY CLINTON ARE NOT RUNNING TO BE PRESIDENT OF THE U.S.   AND, IN ACTUALITY… DONALD & HILLARY  HAVE BEEN KIDNAPPED BY THE MINIONS.   SO…UNLESS… YOUR IN HELL…YOU DON’T HAVE TO WORRY ABOUT THEM.”   Then…I realize…that ain’t true!   Those two devilish asses are up here with the rest of us.   And…hence comes the prayer (I’m not kidding yall) “FATHER, IN THE NAME OF JESUS , WILL YOU PLEEEEEASE PROTECT YOUR CHILDREN FROM THAT LYING DONALD & THAT LYING HILLARY.”

One lies…& the other swears by it.   They are two sides of the same damn coin.  And…It doesn’t matter that one says their a “Democrat” & the other says their a “Republican.”    Do not be fooled by labels.   These are tricks used…to confuse…& to confound.   O.k.  Would the devil be any less the devil if he called himself  “Little Bo Peep?”  Of course not.    Now…he might put a pink bonnet on his head, but damn…he would STILL be the devil.  Alright, then.

These 2 characters lie as easy as they breathe.   And…you know…you breathe involuntarily. You don’t have to think about it…right??  It just happens.   Same thing.   Meaning what? Meaning that being a charlatan (“a fraud”) has become so much of who they are…they don’t even have to try to deceive people.  They don’t.   It’s effortless for them. There is a saying…”What you do the most…You do the best.”   And…these 2 have been carrying it like this for soooo long…they are “masters” at it.   And… I don’t say that lightly.  Now… let’s look at this a little closer.

I want to hip you to a few things.  Back in March 2008, Hillary Clinton gave a foreign policy speech on Iraq.   She talked about her days as first lady & a trip she made to Tuzla, Bosnia in 1996.  Here is what she said, “I remember landing under sniper fire. There was supposed to be some kind of a greeting ceremony at the airport, but instead we just ran with our heads down to get into the vehicles to get to our base.”   She was running against Barack Obama for the Democratic Presidential candidate at the time she made these statements.   Now…here’s my point.   WHAT SHE SAID…NEVER HAPPENED!!!   Let me repeat this.  WHAT SHE SAID…NEVER

HAPPENED.   Meaning?  Meaning…SHE LIED HER ASS OFF.  Who does this???  There were other people, including the media, at the airport when she landed.   Why did she think she would get away with lying about being “fired upon.”  Yes…”fired upon.”  Seriously…   Why would I go around telling people…I have been “fired upon” if…I have never been “fired upon?”  I tell you this…in my entire life…I have never said that.   And…why have I never said that?  Because it is an absolutely CRAZY ASS thing to do.

ABC News ridiculed her statements & the media that accompanied Hillary Clinton on the trip stated that there was no sniper fire.  NONE.  A video of the trip, actually shows Clinton walking from the plane with her daughter Chelsea.  They were greeted by a young girl in a 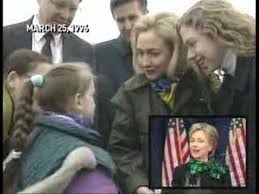 small ceremony on the tarmac.   That’s it and that’s all.   There was no sniper fire at all.  No danger of any kind at all.  When Hillary Clinton was confronted with the lies & the video, she said she made “a mistake” in claiming she had come under sniper fire during the Bosnia trip.  Here’s how she put it & I quote, “So I made a mistake. That happens. It proves I’m human, which, you know, for some people, is a revelation.”  O.k. here’s my question…Who mistakenly goes around saying that people are “shooting at them?”

This was not a mistake made by Hillary Clinton.   A mistake… is when you dial the wrong telephone number.  A mistake…is when you try to break into the wrong vehicle because it looks like yours & you… forgot where you parked.  (O.k. FINE…I’ve been there & done that)  Hillary Clinton’s lying was intentional & she hoped that the lies would make people feel sorry for her.   Well…you see how that worked out.  IT DIDN’T.  And…You know what else??? 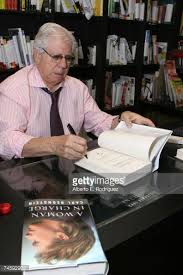 A Pulitzer Prize-winning journalist, Carl Bernstein, wrote a book about Hillary Clinton, titled,  A Woman in Charge: The Life of Hillary Rodham Clinton.   In a July 2015 CNN interview,  he says this about Hillary Clinton, “Clinton has had such a “difficult relationship with the truth” for quite some time that she now has become a “specialist” in fudging facts.”   What does he mean when he says she is “fudging facts?”  What the hell is that?  Fudging???   Why do people like Mr. Bernstein try to clean up… dirty shit?  (Another story for another day)  Why can’t he just tell it like it is?   You know what I’m saying.   You either tell the truth or… you don’t.  O.k.  Here’s what I’m gonna do.  I’m gonna to help Mr. Bernstein out.  I’m going to translate what he is really saying.   FUDGING FACTS = LYING.  Therefore, he is saying this…“She now has become a “specialist” in LYING.”   And…so is Donald Trump.

He is no better.    He actually prides himself on his ability to “con” people.   And…this Presidential run for him is no different.   It’s just another day…where each day brings forth new  opportunities for him to exercise his elevated skills in “manipulating & 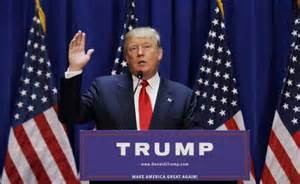 deceiving” people.    Donald Trump finds most people to be gullible & inept.  For damn sure…he thinks himself to be far superior to most people.  Thus…he looks at the world as a place…ripe for the picking.  Ripe for his domination.   You see…he loves to “lord” himself over people because he loves having people “look up” to him.   And… lying is one of the weapons he uses…to make this happen.   He is not choosy about what he lies about. Donald Trump will lie on anyone… & about anything.  What the hell does he care as long as he gets what he wants?  For him…the end…ALWAYS… justify the means.  He did it again at the 3rd Republican debate.

During the 3rd Republican presidential debate held on October 28, 2015, Donald Trump stated, “I am the only person in either campaign that’s self-funding. I’m putting up 100% of my own money.”  This was not true.  According to Trumps’ 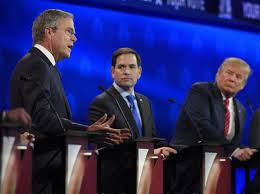 federal filing, his campaign has raised $5.8 million.   Sixty-seven percent (67%) or $3.9 million came from about 75,000 individual contributions.  Trump has put $1.9 million or about thirty-three percent (33%) of his own money into his campaign.  Since when is  accepting campaign funding from 75,000 people… “self-funding?”   And…since when does 33% = 100%?   It’s not that Trump doesn’t know this.  It’s not that he can’t properly add up the numbers.  So…what is it?  Remember what I said earlier…Donald Trump is a specialist at lying…too.  Just like Hillary Clinton.

Jesus says, we are not to allow ourselves to be duped by people like Donald Trump & Hillary Clinton.  He says, 14″Let them alone: they be blind leaders of the blind. And if the blind lead the blind, both shall fall into the ditch.“ (Matthew 15:14)  So…do not be misled by either Donald Trump or Hillary Clinton.   Know who you are dealing with regarding these 2 people.   Either 1 of these people could be your best friend one day… & the next…your arch-enemy.  Why?  Not…because of something bad that you have done…but, because they think it’s expedient for them to do so…in what they are trying to accomplish.    FOR SURE!   This is why you MUST see them for who they REALLY are.    Do not be fooled into believing… they are the people… they’re trying to convince you… they are.   Because…they ARE NOT!  Know a devilish spirit when you see one.  Don’t just accept what they say…at face value.   What we have here are 2 “birds of a feather” trying to perch their lying asses in the White House.  And…they want it bad… REALLY BAD.   So badly, that they will say almost anything to get it.

My question to you is this?   How can devilish spirits lead this country into a better state of being?   How can devilish spirits, who lie for a living, ever be trusted?  They can’t.   Think about it.   Since when… do devilish spirits work for God?  I’m just asking.   Jesus says. 24 “No one can serve two masters. Either you will hate the one and love the other, or you will be devoted to the one and despise the other.“ (Matthew 6:24)  And…for the record,  pathological liars do not work for God.   Lying is not something God does…or condones.  So, choose this day who you will serve.   Will you choose a person to lead you who serves, not God, but himself or herself & the devil???  It’s always your choice.  And…I pray to God…that you choose well.

155 Responses to Presidential Candidates – Donald Trump & Hillary Clinton: Pick One??? How about Pick None!!! Because…One is Just As Bad As the Other!!!