Dear Republican Representatives & Senators: “So…It’s Like That??? You Will Jeopardize Millions Of Lives…Just To Prove…You Pissed On “ObamaCare.”

“You are killing people!”

“You are systematically killing people!”

“Health care is a human right!” 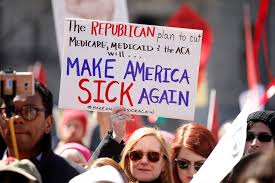 Protesters…yelled out…these statements through the halls of Congress…in protest of the health care bill passed by the House of Representatives &…the health care bill the Senate is…presently considering.  They did this…at the risk of being arrested & locked up in some nasty ass jail. And, I respond, “THANK YOU!  THANK YOU! THANK YOU! Thank you…for having the guts to stand-up for what is right.  Thank you for doing what these weak-ass Republican Representatives & Senators should be doing.”   You see…  These protesters aren’t being overly dramatic in their actions.  NOT AT ALL!  What I see is true grit…& true heart.  Hearts that aren’t afraid to… “FIGHT THE POWERS THAT BE.”  You see… These protesters REALLY understand that the lives of millions of human beings will be in jeopardy if the Republican Representatives & Senators…are allowed to destroy OBAMACARE.  Let me explain… 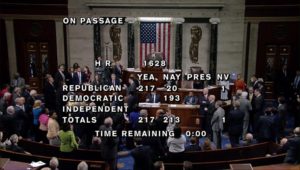 On May 4, 2017, a majority of the Republicans in the House of Representatives passed a health care bill (American Health Care Act) that will cause 23 million people to lose their current health insurance coverage…by 2026.  And, I’m not making this shit up.   These figures came from the Congressional Budget Office (CBO).   When a bill like this is pushed forward in Congress…the CBO makes projections about the possible impact of the bill.   And…  23 million people is a helluva lot of people…to be impacted.  According to CNBC reporting on May 24, 2017… “By 2026, there would be 51 million uninsured Americans under the GOP bill, known as the American Health Care Act, compared to the 28 million people projected to be uninsured if Obamacare stays the law of the land.” 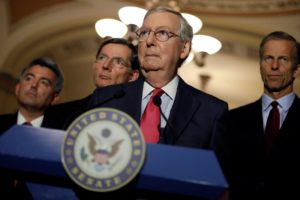 And, currently…  Republicans in the U.S. Senate have drafted a health care bill that they will try to pass this week, according to the Senate Majority Leader, Mitch McConnell (R-Kentucky).  On June 26, 2017, CNN reported… “…nonpartisan Congressional Budget Office estimated that if the Senate bill becomes law, 22 million more Americans would be uninsured by 2026 than if Obamacare remained in place.”  So… The proposed Republican Senate bill is just as bad as the one the House passed.  Millions will lose health insurance coverage.  My question is…  Why???… 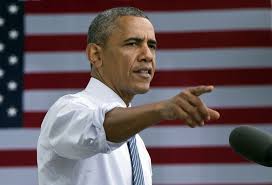 whose name has become inextricably linked to Obamacare.  PRESIDENT OBAMA!  These racist bastards have hated President Obama from day one.  They hated the fact that a BLACK MAN…was now in their WHITE HOUSE.  On March 10, 2010, The New York Times reported… “Before the health care fight, before the economic stimulus package, before President Obama even took office, Senator Mitch McConnell, the Republican minority leader, had a strategy for his party: use his extensive knowledge of Senate procedure to slow things down, take advantage of the difficulties Democrats would have in governing and deny Democrats any Republican support on big legislation.”  COME ON, PEOPLE…  Let’s call a spade…a spade.  Sugar coatin’ shit…serves no one…no good purpose.   And, to piss on Obama…these no good ^$#!*%s… will let millions get sick…& die.   PEOPLE…   NONE OF THIS is something I’m makin’ up.  This shit is happening in REAL TIME…RIGHT NOW!  O.k…

Second, these Congressional Representatives want to use the money saved, by taking away health care from millions…& give those “BILLIONS”  saved… to the “RICH”…through “tax breaks.”    In other words, they are stealing health care from the “needy” to give MORE money…to the “greedy.”  It’s Robin Hood tactics…but…in reverse.   Ain’t that some shit! And…

Third, these Republicans vowed to their supporters…that they would destroy Obamacare. These supporters…also…want OBAMACARE destroyed.  Oh, they too…have their reasons.   They range from “premiums being too damn high” …to…also, hating President Obama.   So, to win their next elections, these Congressional Representatives are fighting like hell…to keep that promise.   There motto is…  “I’m gonna get mine…& to hell with the rest of you.”  You see…  These Representatives love having.. “Money…Power &…Respect.”  And, they get this… “Money…Power &…Respect”…by working in Congress.  So, if keeping their Congressional jobs…means… voting for bills that will cause Americans to die… then, a “yea” vote is…guaranteed.  It’s just that plain.  It’s just that simple.  And… 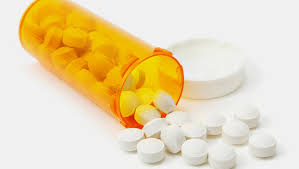 You can bet your bottom dollar that people “WILL DIE”…if the Republicans supporting these bills…have their way.  Think about it…  What happens when people get sick, but…can’t afford medical treatment…to make them better???   THEY GET…SICKER!  These people I’m talking about are not strangers to you & I.  HELL NO!  They are…YOUR family…YOUR friends…YOUR loved-ones.  This shit will spread wide & far.    Now…  Do you know what happens when sick people…stay sick???  THEY DIE!!!  And, to add insult to injury…   Many of these people will be the most vulnerable in our population…children, the disabled…& the elderly.   I told you.   These Republican Congressional Representatives are some cold-blooded vampires…taking legislative actions that will…literally…suck the life right out of us.   And, this shit is intentional.  They KNOW damn well what they’re doing.  But, guess what???  They not only KNOW what they are doing…   They are actually…‘HAPPY’…about voting for & supporting these cruel & heartless health care bills.   O.k… 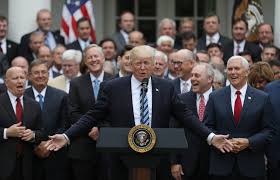 On the day they passed the House bill…President Donald Trump invited them to come to the White House…to do what???  TO CELEBRATE!!!  And, what did your Congressional Representatives do???  They climbed their raggedy asses onto buses….& went…& celebrated…at the White House.  OH, YES!!!  They gave each other high 5’s & everything. But, do know this…  The Republicans, insensitive… celebratory attitude did not go unnoticed.

Congresswoman, Rosa DeLauro, (D-Conn.) tweeted her response to this “celebration” as follows:

Millions of Americans are about to lose health care coverage and the Republicans are drinking beer. Outrageous. #VoteNoAHCA https://twitter.com/ajjaffe/status/860189985856770048 …

Donald Trump and Republicans just celebrated voting to let thousands of Americans die so that billionaires get tax breaks. Think about that.

Stand-up comedian, Patton Oswalt, had his say to all this celebrating…by tweeting:

I’ll do what I can to make November 6, 2018 a dawn-to-dusk nightmare for the GOP. Fuck these smirking, entitled frauds. Tick tick tick.

WHO…BUT A BUNCH OF DEVILISH ASS PEOPLE…CELEBRATE…SOMETHING LIKE THIS!!!  PEOPLE!…  We must come to terms with the truth that not everyone wants to be 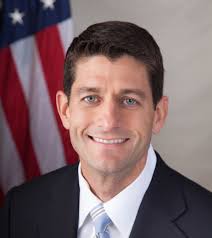 like…Jesus.  SHI-I-I-I-I-T…   There are more people in this world chasing the Devil…than those…who are chasing after…God.  So…  Who are some of these people???  The Speaker of the House, Paul Ryan (R-Wis.), voted for the bill.   You can see him celebrating in the White House picture…above.    The Majority Whip of the House of Representatives, Steve Scalise (R-LA.), voted for the bill.  You also, see him celebrating in the White House picture…above.   Now, remember…  U.S. Representative, Steve Scalise, was the Congressman shot at the baseball field, by James T. Hodgkinson, on June 14, 2017.  Upon admission to the hospital, the doctors did not know whether he was gonna live or die. Now…  It doesn’t take a rocket scientist to deduce that…Mr. Scalise & his family are “thankful as hell” that he has health insurance coverage…during these trying times.  No doubt about it.  So, my questions are these…   Why didn’t Congressman Ryan & Scalise see that “other human beings”…should also have health insurance coverage???  Why didn’t they care???  Why did it make them “happy” to vote to take away millions of other peoples’ health care coverage???   Aren’t these millions of lives just as valuable…as theirs???  Well… 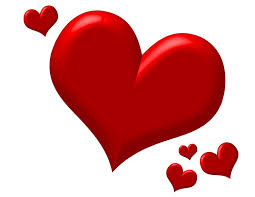 PEOPLE…BETTER WAKE THE HELL UP!  God is a just God.  This is why we have to be so very careful in how we treat…one another. Mistreatment is not an option.  At least…not in the sight of God.  Jesus tells us… “31 Do to others as you would have them do to you.” (Luke 6:31)  If Congressional Representatives want health care for themselves & their families, then…per Jesus…they should want it for all of us.  Jesus also says… “34 I give you a new commandment, that you love one another. Just as I have loved you, you also should love one another. (John 13:34) Well…  There is nothing “loving” about trying to take away health insurance from millions of people.  That shit is just the opposite.  It is downright… “HATEFUL.”  O.k…  My mother passed away a few months ago…from cancer.   And, God knows how thankful I am that she had health insurance.  You see… Having the insurance allowed her to get “medicine”…that made any pain…so much more bearable.  God also allowed her medicine…to lengthen her life.   In addition, if she did not have health insurance, she would not have been able to stay in a very nice nursing home.  This put all of her children…at ease.    So, I truly understand the terrible consequences…that many families will experience…if these lawmakers are able to take away someone’s health care coverage.   But, more importantly…  God knows the consequences.   And… 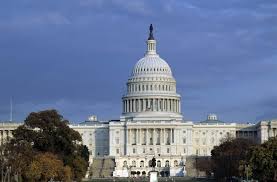 I HOPE TO SEE YOU…ON THE “ROAD OF RESISTANCE!”

245 Responses to Dear Republican Representatives & Senators: “So…It’s Like That??? You Will Jeopardize Millions Of Lives…Just To Prove…You Pissed On “ObamaCare.”