Republican Presidential Nomination: Oh My!… Yippee!!! The Field Has Whittled Down to 3… “Trump…Cruz…& Kasich.” It Is So Damn Crazy. I Don’t Know Whether To Cry Like A Baby…OR… Laugh My Ass Off 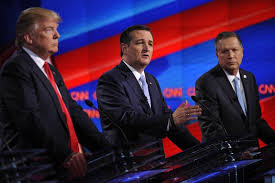 To put it lightly…this whole political season is “crazy” as Hell.  Hands Down!  O.k.   If you know anything about Donald Trump…he’s pretty consistent at being an ass…a sexist…a racist…anti-this…anti-that…blah, blah, blah, blah…blah.   You get the point.   Who he is & how he carries himself shouldn’t surprise anybody…anymore.    There’s nothing new here.   And…some of the people who have been on the receiving end of his poisonous rhetoric, know him  all too well.   He’s basically relentless in trying to destroy people who challenge him.   And…the bastard is downright evil & nasty with it. Oh…Yeah.   That’s how that  %$)#* carries it.   O.k.  Let me tell you…

A couple of weeks ago…Trump and Ted Cruz got into it over an ad put out by a Super PAC that supports Cruz.   The PAC put out an ad that showed Trump’s wife naked with the caption of “MEET MELANIA TRUMP YOUR NEXT FIRST LADY…OR YOU COULD SUPPORT TED CRUZ ON TUESDAY.”   The Super PAC was basically asking Republican Primary Voters…”Do you want this kind of woman as your ‘First Lady’?” Well…Trump blamed Ted Cruz for the ad. And…Trump kicked back by tweeting out a picture with Cruz’s wife & Melania side by side, saying “NO NEED TO ‘SPILL THE BEANS.’  THE IMAGES ARE WORTH A THOUSAND WORDS.” (see below tweet) 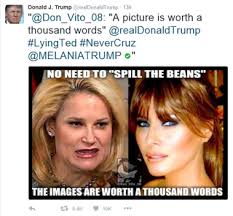 You probably noticed that Trump chose to tweet a picture of Heidi Cruz that is not so very flattering. But…what the hell does he care.   It served his purpose to strike back at Ted Cruz.    But…Guess What???  Trump was not finished.   Oh NO.  He was not finished at all.   So…He contacted his buddies at the National Enquirer.   You know…the magazine known for upholding the highest standards of truth. (I’m kidding)  Anyway…Trump’s buddy at the National Enquirer ran the following story a few weeks ago about Ted Cruz.   On March 23, the National Enquirer alleged that Senator Cruz has had 5 affairs…outside his marriage.   The people who he is alleged to have been fooling around with are:“A HOOKER, A TEACHER & COWORKERS.”  O.k.

This is what Trump meant when he said “Spill the Beans” in the above tweet.  So…Do you see what I’m saying about this man???  He doesn’t care about putting out a story like this even if he knows that shit is false.  True or not…what does he care?  He doesn’t give a damn that Ted Cruz is a married man with two young children.   He doesn’t give a damn about “breaking-up” a family…if he feels you have wronged him in some way.  And…remember…Ted 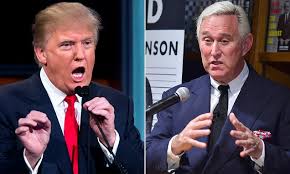 Cruz isn’t the one who put the ad out with Melania.  It was a Super PAC.   Now, don’t misunderstand…Ted Cruz is not someone I would write home about either.  HE’S NOT.   Shit…He is probably just 2 steps up from Trump.   And…I mean baby steps.  REALLY…SMALL…BABY…STEPS!  So…my sympathy is only going to go so far regarding him.  Why?   Because… I believe what God says in ‘you reap what you sow.’  Cruz has done some underhanded shit himself over the last 9 months or so.  (But…that’s another story for another time)  Now… In response to the National Enquirer article,  Ted Cruz said during a CNN town hall event in Wisconsin, “Roger Stone has been Donald Trump’s chief political adviser. He planned and ran his presidential campaign and he’s been his hatchet man — he’s spent 40 years as a hatchet man. But not only that, the head of the National Enquirer, a guy named David Pecker, is good friends with Donald Trump.”

Could the story about Ted Cruz be true???  Of Course!  But, that’s not the point.  The point is that these rascals are TREACHEROUS…& almost as EVIL as the Devil himself.    I kid you not.   Donald Trump…who is known as a “w0manizing”…ADULTERER…has the nerve to have an article put out there against Cruz…that accuses Cruz of being an adulterer.   If that is not the “pot” calling the alleged “kettle” black…I don’t know what is.   But, remember…for Trump…any means used to get what

he wants…IS ALWAYS JUSTIFIED…in his eyes.  And…that bastard wants the presidency of the United States so bad it’s passed him…tasting it.   Oh yeah.   He has already imagined himself sitting down… & chowing down on that shit.   No doubt. 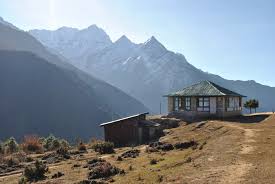 looks very possible…truly… only God knows.   All I know is this…I am trying to learn how to mountain climb…so I’ll be ready to move to the Himalayan Mountains…just in case Trump wins the Presidency.    Sure…my knees might get scraped up a bit…but, I GOT THIS.

115 Responses to Republican Presidential Nomination: Oh My!… Yippee!!! The Field Has Whittled Down to 3… “Trump…Cruz…& Kasich.” It Is So Damn Crazy. I Don’t Know Whether To Cry Like A Baby…OR… Laugh My Ass Off